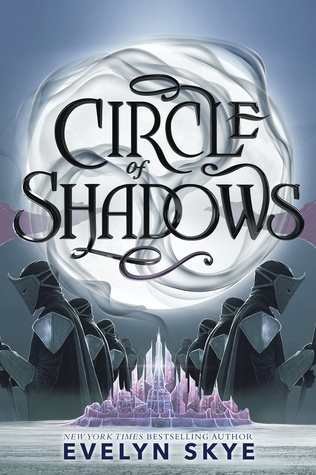 Before I even read the synopsis for Circle of Shadows by Evelyn Skye I kind of just want it for that cover. I don’t know what that smoke circle is or what the knights below it mean, but it definitely gives me a sort of Knights of the Round Table and King Arthur sort of feel. Of course, the purple castle makes me think more of something like The Wizard of Oz, so who even knows. But I do really adore this cover for so many different reasons. As for the story itself, I feel like the synopsis is rather vague and the fact that the main character’s name is Sora really throws me off since I’ve only ever associated that name with Kingdom Hearts (an absolutely amazing video game involving Disney and Final Fantasy that you should really check out if you haven’t).

The story sounds somewhat like it follows a typical fantasy format. There’s an important school that trains warriors in magic and combat. The main characters have a dream of proving themselves and leaving their mark on the world, preferably working in a high position. The cool thing about this story is that it involves the infiltration of the enemy–also a fairly common plot point, I think–but in a way that causes others to seriously question one’s allegiances. So, even though this novel sounds vague and stereotypical, it’s definitely one that I’m quite curious to read.

What do you think of this book? Is it one that might end up on your TBR? Maybe not? Let me know in the comments!