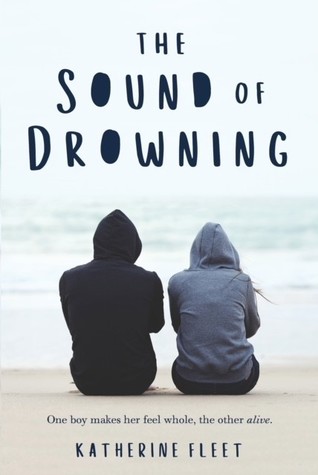 I feel so confused and baffled by The Sound of Drowning by Katherine Fleet. It’s really just that this book seems surrounded in mystery and I don’t feel like it’s ever really explained at all how everything fits together and why this book was even written. What’s the plot? I really want to know, so if you figure it out, drop a line in the comments. So, there’s a girl who sneaks out regularly to meet her best friend (and love); she apparently almost lost him in the past, whether that be from near death or separation, I have no idea and she’s determined to keep him now. As someone whose never felt close to another person, Meredith is convinced she cannot be happy without Ben, right up until some random guy called Wyatt washes up on the shore, likely half-drowned. And so, it’s clear pretty early on that this book is basically one giant love triangle. That part, I won’t like, kind of makes me want to gag.

The thing is, I can’t determine if this book has some mystical or supernatural pieces to it. It seems like that could be possible, but at the same time? And honestly, that’s the main reason why I find myself interested in this book, because if there is a sort of magical aspect to the novel, then I definitely want to read it. But…if not, I’m not so sure that I do? Has anyone read this book so that they might be able to clear up this one little piece for me? Anyway, this book is tentatively on my TBR and I suppose we’ll just have to wait and see if it stays there.

Meredith Hall has a secret. Every night she takes the ferry to meet Ben, her best friend and first love. Though their relationship must remain a secret, they’ve been given a second chance, and Mer’s determined to make it work. She lost Ben once before and discovered the awful reality: she doesn’t know how to be happy without him…

Until Wyatt washes ashore―a brash new guy with a Texas twang and a personality bigger than his home state. He makes her feel reckless, excited, and alive in ways that cut through her perpetual gloom. The deeper they delve into each other’s pasts, the more Wyatt’s charms become impossible to ignore.

But a storm is brewing in the Outer Banks. When it hits, Mer finds her heart tearing in half and her carefully constructed reality slipping back into the surf. As she discovers that even the most deeply buried secrets have a way of surfacing, she’ll have to learn that nothing is forever―especially second chances.

How do you feel about this book? About the love triangle? Is it a novel you might be interested in reading? Or do you think you’d rather not? Let me know all your thoughts in the comments and happy reading!