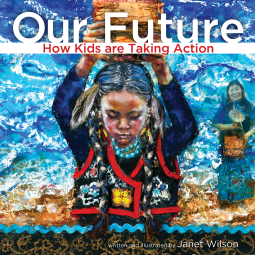 The number one thing that I can say about Our Future by Janet Wilson is that it is an incredibly uplifting book to read. If you ever feel as though you are in a situation where you feel hopeless for the world, this is a good book to pick up. Whereas often the news can make you hate humanity, Our Future features a number of children who have taken strides toward building a better world for not only themselves and their friends, family, and communities but for others in the world who will come after them. And to see that there are children out there who are deeply aware of the issues of the world and making efforts to resolve them is a truly heartwarming thing. It genuinely makes me feel as though there might still be hope for the people on this earth, especially with how down I’ve been about it of late.

From a little girl who wants to make drinking water safe in her community to a young teen boy who speaks out against gun violence, the stories in this book will make you feel hope for the future and wish that you’d been as knowledgeable as they were when you were young so that you, too, could make a difference. There’s even a story about a six year old who wrote a letter to the president about saving children who have been hurt in Syria, saving refugees, and even offered to share his bike with other children. And to think there are so many adults out there who cannot bring themselves to be as kind as a child this young.

I am so glad to have gotten a chance to read this book. I wish that I had been more like these children when I was young, but alas such amazing children sometimes need parents who are aware of the issues and encourage their children not only to learn about them, but to really take efforts to make the world a better place. I would encourage having this book on your shelf both for yourself and for any children in your life.

I was provided a free copy of this book via NetGalley in exchange for an honest review.

4 thoughts on “Our Future [Janet Wilson]”