And, understandably so, unfortunately. 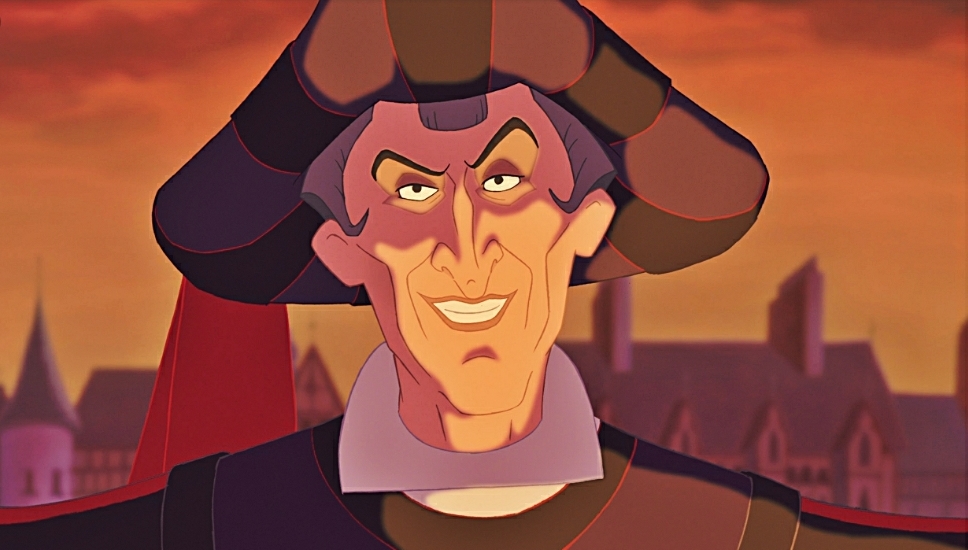 Every time I’m reminded that this film exists, I’m incredibly sad that it so often gets lambasted. And I do get it. In many ways, this film is pushing the line of being appropriate for children. With central themes of religious extremism, unreasonable persecution, sexual assault (and other heinous acts coming from a man merely because he finds someone attractive [see: Hellfire]), and racism it’s not really the “family-friendly” tag-line that Disney is so obsessed with pushing of late.

At the same time, though, this is one of the few films in which I find myself thoroughly grateful for the villain’s existence. Of all the evils that exist within the framework of Disney, Claude Frollo is the most real and comparable to people we could conceivably know in our own lives.

Frollo is that “boys will be boys,” “I’m entitled to her because of what she was wearing,” “I’m better than you because God says so,” person. He embodies the extreme side of religion that suggests a certain type of person, namely male and white, is better than others. He embodies the entitlement some men have in believing that just because they are sexually attracted to someone, that they somehow deserve and must have that person.

He persecutes an entire city and a whole race just to get her for himself.

Frollo presents himself as the supposed hero of the story. He genuinely believes that he is the moral authority, that he is doing what’s right. And that, in itself, shows how exceptional of a villain he is. The most well-written villains are the ones who truly believe they are in the right. And it’s just fascinating to me that we have a film (from 1996, mind) that is addressing these kinds of issues. It baffles me how much The Hunchback of Notre Dame constantly gets looked down upon.

To be fair, I recognize that religious extremism is something that an unfortunate number of people like to ignore and rarely condemn, at least as far as Christianity, anyway. That alone irritates the heck out of me. But maybe one day we’ll come to a time where this movie can get the appreciation it deserves there.

I’m grateful that my parents let me watch this movie as a kid. While I never would have understood many of the central themes (nor many of the jokes), the fact that something I watched as a kid combatted this idea of male entitlement to the women they like as opposed to the many, many films that suggested men could ignore consent is something I’m immensely grateful for. I think I’ll always appreciate Frollo as a villain. He is the villain that didn’t hide the damage religion can cause, the villain that condemned men’s unwanted sexual advances, the villain who showed me how heinously evil it is to hate a people for their race or their disabilities.

And while The Hunchback of Notre Dame is very often ignored for how dark it is, it’s one that at least offers a lot for those who watch it to learn.