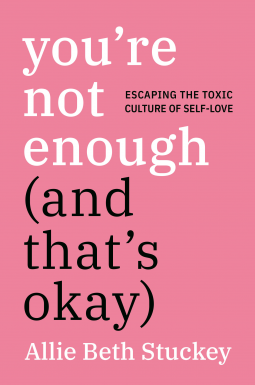 There’s got to be something perhaps rudely ironic about the way I titled this post, but I honestly just couldn’t help myself with this one. And, frankly, I’ve never really taken that whole, “don’t use ‘god’s’ name in vain” thing very seriously. Let’s just say religion in general–and Christianity in specifics–has let me down often in life. Science, on the other hand, keeps me grounded. But I digress.

I happened across this book while on my usual check out what’s new on NetGalley today scrolls through the internet and…was initially intrigued by this “you are not enough” and “toxic self-love” concept. I won’t say I fully agreed with it, but I was at least curious enough to be like…well, let’s see what Allie Beth Stuckey has to say.

And then I read the synopsis.

This is the point where I scream into the abyss in utter frustration at the existence of people like this. One reviewer, Erin, seems to sum up this idea of this book quite accurately. You’re Not Enough (and That’s Okay) is nothing more and nothing less than:

So, thoroughly disgusted, I decided to do a little more digging. And then I felt horrendously disappointed in humanity. This Trump-supporting, Fox News watching, conspiracy-theorist, “pro-life” (which is basically just code for denying women’s rights and forcing children to be born but not being willing to provide services for them–how is it that so many pro-life people are also anti-welfare?), religious fanatic has nearly 300K followers. Why, why, WHY do so many people insist on making the world a worse place than when they entered it?

I’m already 99.9̅9̅% sure that Stuckey is both a terrible person and a giant idiot, however, in the interest of being fair, I’m going to read her book. I’m very certain that I will probably disagree with everything in it–her Twitter page was more than enough to see that she’s got some issues with recognizing the truth because according to her the World Health Organization is led by a terrorist as if that makes any sense–but hey, if I’m going to complain about something I might as well have all the information.

We have so much potential for goodness, but people like this always seem to ruin it.

4 thoughts on “Oh My Lord, Please No”