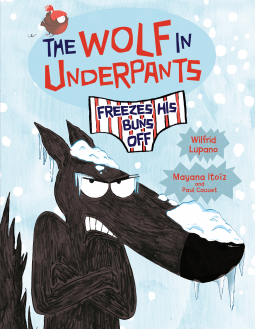 I’m honestly entirely unsure what to think of the book I just read. The Wolf in Underpants Freezes His Buns Off by Wilfrid Lupano, illustrated by Mayana Itoïz and Paul Cauue, was an incredibly odd book. I feel like I must have missed something somewhere–perhaps it’s that I never read the first one–because this book was just awkward and uncomfortable. To put it frankly, I just did not enjoy this story.

Featuring a wolf wearing nothing but striped undergarments, the story sets you up in the middle of winter when all the animals are bundled up and enjoying the snow. All, that is, except the wolf who spends every moment he can grumbling about muttering, “they’re freezing.” Not wanting the wolf to revert to wolf-ish ways, the animals of the forest soon band together to warm up the wolf.

There’s something quite off about the plot.

Animals start to go missing, something reminiscent of the game telephone occurs, and I’m left feeling as though I’ve read a book that tried far too hard to send a message and ended up feeling creepy. You see, the animals that are going missing happen to be the young ones rather than the adults. And then there’s this thing about the wolf possibly eating them, resulting in a bit of a mob scene as everyone else bands together against him.

And while the artwork was beautiful–enough to save this book from a one-star rating–I just can’t get past how uncomfortable I felt with this story. The underpants bit, which is surely meant to exist as some form of comedy for the children reading this, is just weird and kind of gross. Also, I don’t understand how the buns fit into the story at all?

In the end, I’m left not sure what to think. But I can say this much…I don’t think I’ll be letting my niece read it as I had originally intended.

I was provided a free copy of this book via NetGalley in exchange for an honest review.