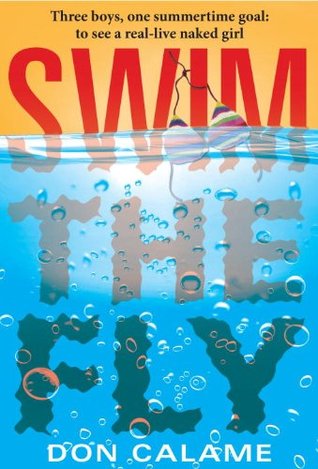 I’ve always known that my boyfriend isn’t the best at judging what good fiction is. It’s not really his area of expertise and thus I was actually somewhat reluctant to read Swim the Fly when he recommended it to me. What he posits about this book is that it’s realistic–apparently he related to it as an adolescent–and I suppose in the mind of a fourteen-year-old boy I can give that to him. I wonder, if he read it now, would he still like it as much as he did when he was in eighth grade? I certainly hope not. You see, I actually really hated this book. I was perhaps somewhat more forgiving in my rating of it than I would have been had this not been a book he’d given me.

Honestly, I really couldn’t give a damn how desperately a boy wants to see a naked girl. They can get over themselves and realize that, at some point, it’s bound to happen for them one day. There is absolutely nothing that makes looking at a woman naked without her consent okay. And the boys in this story go out of their way in, at times, illegal ways to get a peek at a woman or young girl naked. All the while they’re egged on by the disgusting grandfather and his antics.

I just…surely there are plenty of better books to read that aren’t horrible and still discuss this topic? And while I realize that there are likely many boys who act like this, that doesn’t mean we need to normalize their awful behavior.