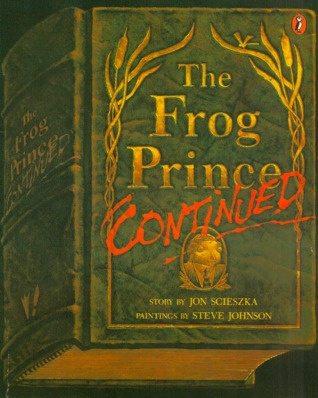 The Frog Prince, Continued by Jon Scieszka and illustrated by Steve Johnson is kind of a book for children. But it’s also kind of very much for adults. For kids and parents who love the story of The Frog Princess–the original fairytale, mind, not the Disney movie–this could be a fun story to read together as it’s got stuff for both. But, the heart of this story is a tale about feeling out of place in a new world and marital problems.

A fractured fairytale, The Frog Prince, Continued follows the Frog Prince himself who, after a series of arguments with his Princess wife, sets off on a journey to have someone turn him back into a frog. Thus ensues a rather hilarious account of the Frog Princes’ journey, meeting a variety of witches to ask for the magical solution he is seeking. But, of course, witches are not the best to turn to when you want something and returning to his old life isn’t really what the Frog Prince wants.

The artwork in this book is of a dark nature, often creepy-esque in its depictions. I found it enjoyable enough, but I imagine that there are likely to be some children who find it scary. There are especially some dark moments throughout the story that, while many children will likely not understand the subtext, could still leave them somewhat afraid.

I generally found this story rather clever and amusing. It’s kind of like Shrek, in a way. Entertaining enough for the kids with a lot of hidden messages so their parents can enjoy and appreciate it, too.